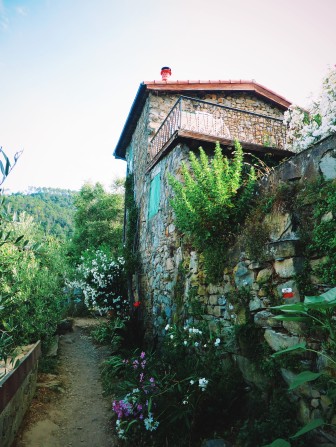 Processed with VSCO with k2 preset

Processed with VSCO with k1 preset

My sister and I chose the picturesque village, Manarola, as our homebase for my few days in Cinque Terre, a string of five seaside villages along the Italian Riviera Coastline. This bite of paradise had some of the best views of sunsets, iconic colorful architecture, and a friendly atmosphere that made you feel quite at home!

Accessible primarily by regional trains and endless hiking trails, Manarola has countless apartments and rooms for weekend to week rent. I stayed in a spacious apartment overlooking the village and sea with a romantic terrace perfect for cappuccinos while reading a novel. The chain of apartments we rented from was owned by Manarolavistamare. We were greeted by Simone when we stepped off the train to escort us to our living space up and into the fabrics of Manarola and then checked on by Nicoletta later during our stay to make sure everything was working smoothly. They were both beyond kind and friendly, pointing us in the right direction in terms of restaurants and tricks of beating the rush of tourists and heat when taking to the trails, among other things. 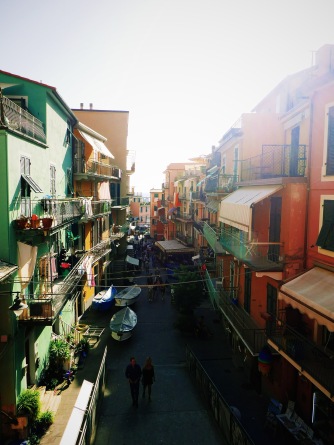 The space was Studio Suite Vermintino, one of three centralized apartments right next to the incredible Trattoria da Billy, rated in the top restaurants in Manarola since the beginning! And for good reason too! The night I went to Trattoria da Billy, I had grilled veggies and “catch-of-the-day,” topped off with a limoncino and frozen cream dessert. Each course is a level of fresh that you can taste and a sense of homemade love that leaves you wanting for more!

Each and every restaurant in the Cinque Terre, and those in Manarola that I visited, pride themselves in perfection. The flavors come from the surrounding hills and vineyards and fruit trees and the sea itself, never failing to amaze me.

(read more on the cuisine in Italian Cuisine – Cinque Terre)

My very first night was spent over the bay at Marina Piccola, where I indulged in my first taste of squid ink. When you go to any new place, you can’t have ideas that something will taste a certain way, until you try it! This squid ink linguini became my all-time favorite dish in less than three bites! There were shrimp and other small morsels of sea food laced in the folds of black pasta, and the sauce brought the meal together seamlessly. Paired with local wine and cheese, you really couldn’t go wrong!

As I mentioned on my cuisine chain, make reservations ahead of time!!

We watched as a few groups and couples came in and were promptly turned away due to the full space. Don’t let that be you!!

Each morning, you wake up early (to beat the rush of tourists) and gaze out at the sea. Do you go left, or right? To the left is Riomaggiore, the largest of the five villages full of markets and small shops. To the right are Corniglia, Vernazza, and Monterosso al Mare. My first morning, we took the train to Monterosso  in order to take on the most difficult of the popular hiking trails to Vernazza. The next day, we took the Panoramic hike which we later found out was more than 1,000 stairs in all and less trodden than the other trails… I wonder why… But the views were worth each and every incline.

Coming back around six or seven in the afternoon, it was time to unwind and drink a glass of sparkling water, or wine.